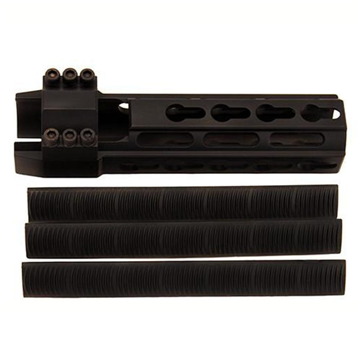 Owning and shooting a sporting rifle is a lot of fun and can be very rewarding, especially if you build the platform yourself. There are many different sporting uses for sporting rifles, ranging from target shooting to competition shooting and hunting. It is called a sporting rifle, after all.

It is very common to see many different models of sporting rifles of all different makes and models outfitted with quad rails that offer the user a large surface of standard Picatinny rail mounting space. For a long time, Picatinny rail space has been the standard when it comes to mounting accessories and attachments to a rifle or another firearm. Truthfully, it’s fairly common to see shotguns and handguns with short sections of Picatinny rail attached to their receivers or trigger guards. The Picatinny rail is nearly universal and, for that reason, the overwhelming majority of attachments and accessories are built around that mounting interface.

There’s nothing at all wrong with Picatinny rails. In fact, they offer a really excellent system for mounting accessories like lights, optics, and grips. That being said, there are many alternatives out there that do happen to offer some benefits over them. One of these is the KeyMod System.

KeyMod Systems are designed to be a universal replacement for Picatinny rails and do happen to offer a few advantages over them. The KeyMod system is designed to be a locking system whereby a large range of KeyMod accessories can be mounted directly to the rail. They are fairly easy to use and it’s becoming common to see more and more rifles and other firearms outfitted with KeyMod Systems.

There’s another reason. Anyone with a full-length quad Pic rail that has spent a lot of time shooting round after round with nothing to grip onto but the rail will understand what we’re about to say. It can be downright uncomfortable to absorb the recoil of some of those rifle rounds through the sharp edges of a Picatinny rail.

The design that makes a Pic rail great at offering a secure mounting point for accessories makes it very uncomfortable to grip. In the short term, it’s easy to get a secure grip on a Pic quad rail, but over the course of several thousand rounds, it’s really not so great anymore. Those edges dig into your hands and bite over time. Even if you shoot over a naked KeyMod System, it will be much easier on your hands. Then again, the question that needs to be asked is why have a full-length rail without accessories? But that’s a question for another time.

There are two more things to consider. One is that most KeyMod systems offer a section of Pic rail at the top of the system so that you don’t have to part with your favorite Picatinny accessories. The second is that a KeyMod system enables you to mount KeyMod accessories at a 45-degree angle, which is something that is not practical with a Picatinny quad rail. A KeyMod System will enable you quite a bit more versatility in mounting accessories and what you can fit on the rail, provided the accessories are compatible. To that end, the first of the KeyMod accessories we don’t want you to miss are:

Picatinny Rail Adapters
Picatinny rails have been the standard for mountain accessories for so long that breaking from them, even in the form of what has been called a superior system, just can’t be done overnight. The vast majority of accessories for firearms are compatible with Picatinny rails, some of them exclusively.

To that end, most KeyMod Systems are built with a Picatinny rail along the upper length, giving you the flexibility and freedom to stick with the accessories to which you’ve become accustomed.

That being said, what happens when you want to mount a handle or a grip to the bottom of a KeyMod System or a side saddle or some lights or other accessories to the side? One solution is that you have to find KeyMod compatible accessories that fit the bill.

The other solution is to pick up a KeyMod Picatinny adapter and put it in the slot where you want to mount the accessories. Then you can get the benefits of both. Moreover, Picatinny adapters for KeyMod Systems are easy to find and practical. Therefore, there’s really no downside whatsoever to investing in a KeyMod System or a new rifle that has one. If you were worried about having to give up your favorite rail accessories, you can cross that off the list. You’ll just need to pick up an adapter and you’ll be good to go. With that out of the way, here are some great KeyMod accessories you won’t want to miss that can help make you a more effective sportsman and make your life easier as well.

Grips
KeyMod compatible grips are one of the most functional accessories out there. While we already mentioned that KeyMod Systems are not too uncomfortable to use themselves as a grip as part of the forend, there are some great grips out there that you can easily attach to the bottom of your KeyMod System. They can make shooting more comfortable and they can make you more effective as well.

There are plenty of vertical grips and handstops on our site that you can use to accessorize your favorite sporting platform. One thing you’ll really come to love about some of them is the fact that, unlike fixed forends, you can easily reposition grip accessories on your mounting system. That means that if a position doesn’t fit you well, you can just change it up to get a better fit.

We even offer some grips on our site that incorporate lights. There’s not too much out there that’s more useful than a flashlight that’s mounted on the bottom of the rail of a sporting rifle, especially one that can be activated by pressing the trigger on the grip like some of ours. It’s a surprisingly useful accessory that can make you more steady, and unsurprisingly, shed a little light on a dark situation.

Bipod Mounts
A bipod is not a completely necessary accessory for every shooter, and we recognize that, but there are certain situations where the ability to mount a bipod to your rifle is a real boon. There are plenty of scenarios in which a bipod can become useful, but there are two that really stand out.

The first is in long-range shooting. Whether or not it is competitive doesn’t matter. What does matter is the fact that in order to be an effective long-range shooter, one of the most important things you need is stability. There are ways to be effective in improvising mounts and resting your rifle on your forearms, but very little can beat the reliability of a good bipod. Some of the best models easily adapt to uneven terrain and are flexible enough to give you a level, flat surface from which to line up the target. Using a quality bipod to be an effective long-range shooter has real benefits, bar none.

The other is if you are a hunter and use your sporting rifle to take long shots at game. In a situation like this, a bipod is even more important. No one really cares if your shots on a paper or steel target a little sloppy. It might aggravate you to score poorly in a competition, but there are no real stakes. When you are hunting over distance, life and ethics are at stake, and no hunter wants to take risky shots.

A bipod, which can easily be mounted to a KeyMod compatible bipod mount, can mean the difference between a viable shot and one that cannot be ethically taken. Fix a KeyMod bipod mount to your system and you’ll have two problems solved right there, but as you’re about to find out there are other KeyMod accessories that can do even more to make you a better long-range shooter.

Optics
Optics are another one of those things that can make you a more effective long-range shooter, but let us get this out of the way quickly; they can do much more than that. There are optics for long-range, short-range, and reflex shooting, and with a KeyMod system, you can interchange them fairly easily, although you’ll need to resight them every time you move them.

Scopes can, unsurprisingly, make you a much more effective long-range shooter, especially in conjunction with a bipod as we prescribed earlier. You can choose between a wide range of scopes for different settings, from fixed magnification scopes to variable magnification scopes and plenty that work well in low lighting as well. Just like a bipod, a good scope with the right power that’s sighted in properly can absolutely make the difference between a viable shot and one that you need to pass up.

You can also mount a sight like a red dot sight over your receiver if you need to be more effective at close range. If you’re in the habit of rapid-fire shooting, as in, say, three-gun competition, a red dot sight can be a very viable solution. It allows you to maintain a really clear sight picture, doesn’t require you to line anything up and can make you much quicker and more accurate behind the trigger. There really are a lot of benefits to them, depending on the type of shooting to which you’re accustomed.

Sling Mounts
If you’re in the habit of carrying your rifle for long hours, or days even, over rough country, then you are more than likely used to using a sling. If not, be aware that using a sling in the field can make you much more comfortable. It can make it a lot easier on you in the field as well, as slinging your rifle over your shoulder just gives you one less thing to carry in your hands.

While it won’t necessarily make you a better shooting, it will make your life easier as a hunter if you spend a lot of time glassing for game and then chasing it down, especially over many miles. You don’t have to make it hard on yourself, either. You can pick up a quick detach sling mount that makes it just about as easy as pressing a button to mount or remove your sling.

Lights
Lights are another accessory for which you might have a need, particularly if you keep your sporter for self-defense. Preparation is the hallmark of self-defense, so if you ever find yourself in a dark room (and anyone can) it’s important to have lights attached to your platform to give you the advantage.

Rail Covers
Rail covers are not a necessity, but if you find that a KeyMod System, like a Picatinny rail, is somewhat uncomfortable for you to grip, you can also cover up some of the sections with KeyMod covers. It’s just something to keep in mind as you’re shopping - if you don’t like the feel of a bare KeyMod System, you can always cover it up.

These are some of the most useful KeyMod accessories that you can find on our site, and there are many others here as well. Even if you need to use an adapter with them, you can find them at White Knight Supply so that you don’t need to forgo your favorite accessories. Check out our collection, and don’t forget that shipping is free.